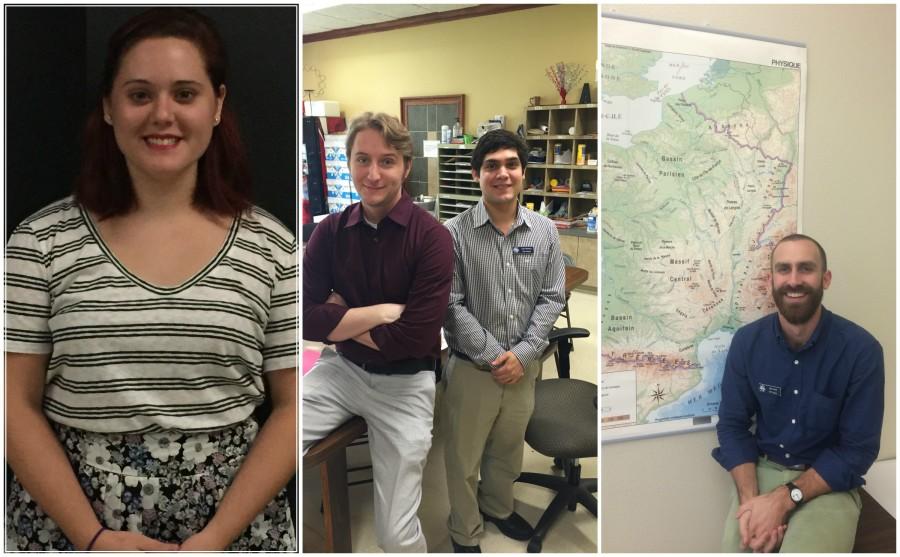 For all you poor souls trying to get with the new schedule and whatnot, we have a little advice for all of you. As always, Leighton’s is the fancy font and Tyler’s is the boring font.

You might be thinking, “Who in the world are all these new faces?” So my BFF Tyler and I went to talk to some of the new teachers about their background… and they’re pretty cool. Here are their stories: Juan Mostajo was born in Peru and moved to Georgia when he was only twelve years old,where he later attended Georgia College and Georgia State University. He’s also lived in Venezuela, Argentina, and Mexico. From a very early age, art was his passion. He was able to easily adapt to different cultures as he travelled in his youth. This inspired his eclectic style of art that helped him to get his bachelor’s degree in the fine arts. By far, Juan’s favorite place is Lafayette. Even though he has only been here for three weeks, he has been really accepting of Lafayette’s rich, French culture. More importantly though, he loves his teaching job at Ascension because he is able to share his love of art with students.

Monique Arabie (the teacher with the super cool, pretty hair) grew up in Plano, Texas but moved to Lafayette just four years ago to attend UL. During her time there, she earned her bachelor’s degree in performing arts. As a teenager, she was inspired by her high school drama teacher to teach theater. She was involved with CYT (Christian Youth  Theater) as a youth drama teacher before coming to Ascension. In the near future, she plans on moving to Chicago to get her master’s degree. If you’re still wondering which teacher this is, she wears high heels a lot and seriously, her hair is so pretty.

Arnaud Leclerq was born in Brussels, Belgium where he attended the Catholic primary school Mother of God. He then attended ISBG College where he received his bachelor’s. He is the only teacher at Ascension who speaks four different languages (Dutch, English, French, Spanish), and teaches both French and Spanish to eighth, ninth, and tenth grade. After he moved to the U.S. four years ago, he met his future wife at a teacher training session in Baton Rouge. Coincidentally, they were both originally from Brussels and had attended the same school but had never come across each other. After they both landed jobs in Louisiana, they started dating for a year. Monsieur Leclerq told us that he would drive all the way from New Orleans, where he was teaching at a high school, to visit her in Henderson where she still teaches. And while he has only been in Lafayette for two months, he says that he loves it here. He says that Lafayette is unlike any other place on earth, and he can see himself here for a long time.

Brian Sanford grew up here in Lafayette, Louisiana and attended Lafayette High School. His voice instructor there inspired him to teach music. He traveled to New Orleans where he was an undergrad at Loyola University. While he was there he took voice lessons from a teacher at Tulane. He has always been interested in music. Even as a child, he wanted to be a rockstar. As he got older, he realized maybe teaching would be a better alternative. Before becoming a part of Ascension, he taught at Carencro High. He was also involved in CYT where his wife directs and teaches.