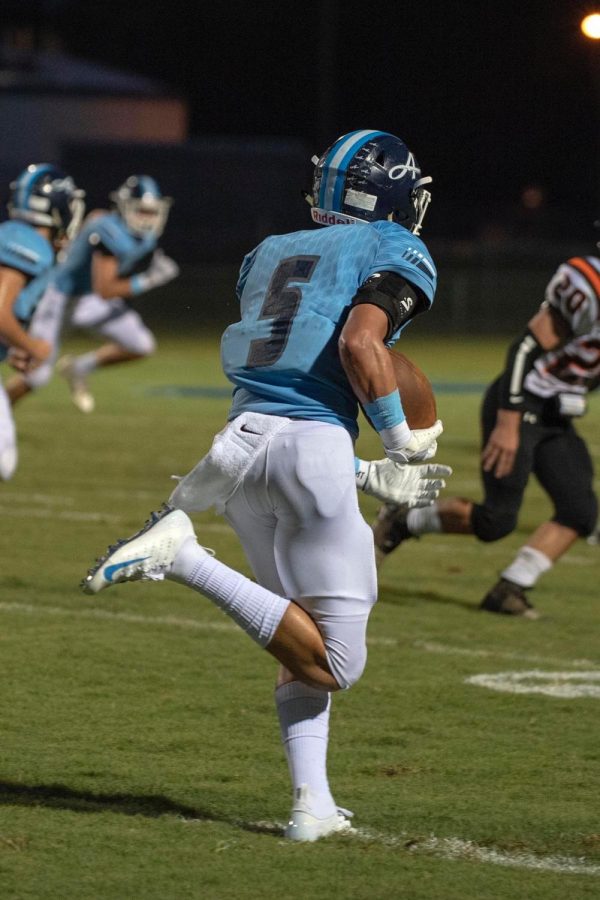 That feeling is near. It’s horrifying when it’s coming toward the end of football season, and as a huge fan of football, you never want the season to end. Well, that’s how the school of Ascension feels. However, we still have playoffs! In the first round, we play Menard at home, and the emotions are running high. Many people have opinions on how the season is going and how the playoffs will go, but here is the inside scoop.

Not only do the fans feel sentimental towards the season, the players do as well. I asked two of the senior football players, Gus Maraist and Eli Fournet, how they feel and how they felt about their last season. Eli Fournet feels like they could make it far in the playoffs, saying, “I’ve had a satisfying season that has been so fun because of the memories I’ve made throughout the year. I’m going to miss this feeling every Friday,” while smiling. When I asked him what his favorite part of the season was, he said, “The homecoming game for sure. It was so fun to play with my brother for one last homecoming game.” Gus Maraist adds on by saying, “I’ve loved celebrating victories in the locker room. Nothing beats the feeling you get after a hard fought win and blasting music and clowning with all the guys just adds to that feeling.” As he says this, you could visibly see him think back to all of the times they were having a great time in the locker room, having a blast. Although Gus is injured, he’s still confident in his team and excited for what’s to come. “We’ve definitely got a good shot. With the way the bracket fell this year, a deep playoff run isn’t going to  be handed to us but I think if we keep on clicking like we have been the past couple weeks, we can be a very competitive team in the playoffs,” Gus says without hesitation. When I asked him if he could describe his last high school football season in three words he proudly states, “Bittersweet, because obviously getting injured and not being able to play is a little bit of a bummer, but being able to fill the role of the sideline hype-man has been really awesome, and obviously being part of a winning team is always good. Funny, because we have so many guys who are some clowns on our team that it always keeps things interesting on breaks at practice or in the locker room. Memorable, because the friendships I’ve strengthened or built with the guys on our team and some of the memories I’ve made over the course of this season are things that I’ll never forget.” This amplifies that feeling of camaraderie and the feeling of being apart of something special.

To seniors, like Eli and Gus, football is more than a game. It is a family. It’s the sense of being apart of something special and being included. It’s the locker room victory celebrations. It is the homecoming. It’s the bittersweet moments. It’s playing in the playoffs. It’s the funny, hype, and memorable times throughout the season that makes it special.