The Wait Is Over: Football Season 2019 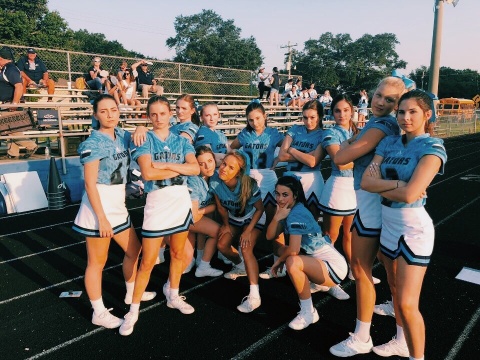 I’ve said it once and I’ll say it again, touchdown, Gators, score six! Friday, September 6, the Blue Gators kicked off football season against the Erath High Bobcats in Erath. The day started with the traditional leadership class hype crew, greeting students as they walked into school with classics such as Drake’s “Big Rings” and DJ Khaled’s “All I Do Is Win.”

The game began at 7:00 sharp, with fans packing the stands in their favorite jerseys, fitting the theme perfectly. Senior cheerleaders wore the jerseys of their favorite senior football players, while other members of the squad wore navy blue spirit jerseys. The game itself started off to a rocky start with the Erath Bobcats scoring early in the first quarter. But have no fear, the Gators are here. With our offensive line hard at work to protect our quarterback, the Gators were able to grasp a 14-7 lead over Erath. However, this lead was short, causing the score to go back and forth for the remainder of the game. The Gators came back with a 34-27 victory over the Bobcats with only one minute left in the game. When I asked junior quarterback Cole Simon what he thought of the game and going into the season, he was quick to respond with, “I think we had a good game. Everyone did what they were supposed to do, and it all worked out. If we all do our jobs and minimize our mistakes we will have a great season.”

A huge congratulations goes out to the players and coaches on their hard work leading up to their season opener. Catch the Blue Gators at home today, September 16 against Catholic High Pointe Coupee at 7:00. A special reminder from senior cheer captain Faith Robinson to “come out for the Fall Sports pep rally to celebrate the football home opener and all fall sports at 2:20 in the SMP gym.”