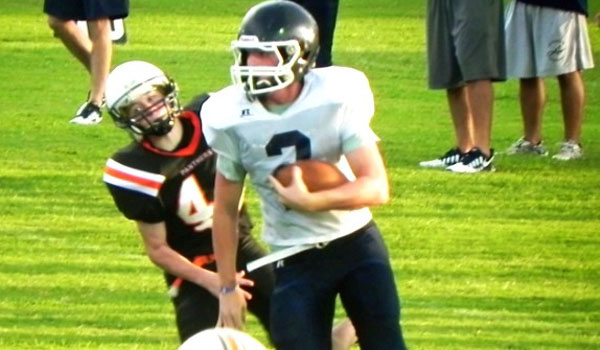 As fall creeps closer, what also approaches is football. Head AES Gator Football Coach Mike Desormeaux talked about this new playing season and all the potential it holds.

What are you excited about for this year’s football season and why?

“This year I think what we are really excited about is that there’s a whole lot of changes going on, a lot of new stuff happening, and that’s always fun to bring something new and different not only for us, but also for the boys that are on this team. It brings excitement in and of itself.”

What changes did new coaches bring to AES football?

“As coaches we did bring changes. Offensively and defensively, we are doing things a lot differently, which is good. We are going to be way more aggressive than we have in the past. We are going to try to get after people and try to attack them a little bit. Also, one of the things I think we are bringing, as a new staff that is working here, is consistency. Being around the guys, our schedule is going to be the same all the time. We are going to make sure we focus on those core things that are important to us everyday.

What part of the football team do you coach or focus on?

“Well I coach the quarterbacks, and I coach the offense. I am the offensive coordinator. I also help with the defensive backs. Basically, when you’re the head coach you just try to manage everything. I let all my position coaches do their job and determine what they are here to do.”

What is your football philosophy?

“There’s only one way to play football, and that’s full speed. I think it’s a game that requires great effort, energy, and a ton of emotion. We coach it with a lot of emotion, and I feel like we bring a lot of energy everyday. Our philosophy is that we are going to go out everyday, and we are going out with something to prove and practice like it. On top of that, the little things everyone preaches, ‘protect the football, be good on third downs, have to score on the red zone, win the fourth quarter’, those are the kinds of things we hang our hats on which I think a lot of schools do. For us, its definitely no different.”

What part does football play in the overall picture of the school?

“I think this is a really important question and a great question. I think football can really kick start a school year. I really do. I’ve been around places where we had a great start to the school year, and coincidentally, we also had a great football season as well. We started great, and there was tons of excitement around the school. I also had years where school was kind of dragged through a little bit, and I think part of it was we were dragging through on Friday’s games. I think, also, everyone loves football, even if it’s not your favorite sport. Everyone loves to be out there on Fridays and watching it under the lights. I think football plays a big part in the moral of a school. So, I really hope we can come out this year and give everyone something to be proud of.”

What players are you looking forwards to see play this season?

“I’ll be honest with you. That’s kind of a tough question for us. Everyone is new. It’s really exciting to see all of them out there and in action. Guys like Joey Greco and Miles Carrier, we know what they can do. They’ve been playing for a long time. I think guys we are excited about are guys like Alex Stuart, who’s changing positions on defense, guys like Logan Daigle, who’s being asked to do a lot more, and guys like Alec Stolzenthaler, who was hurt all last year. Those guys are exciting for us because it’s brand new for us to see them play. We’ve got film from last year, and we’ve seen some of the other guys. I think the things we are asking Trevor Doucet to do are going to be exciting to see, and he and Jake Arceneaux are in that competition for quarterback. I also think Ja’Ceiry Linzer is going to be exciting to see; he’s stepping up a little bit and growing up. There’s tons of guys we are excited to see play. There’s really just a few that we know what to expect from.”

Give an example of how one becomes a team player.

“That’s a conscious effort everyday that you make. We talk about it all the time. We have to control the things that we can control, and one thing we can always control is our attitude. That’s really all it is about: your attitude. You have to come out and do what is valuable to the team over yourself everyday. We need team players. We need AES Gators. We don’t need a certain running back, or certain receiver… we just need all guys that are willing to do what it takes for their team. Consistency plays a big part here as well. We are going to demand that there will be team players everyday. The guys showing up everyday with a great attitude and bringing great effort for the team will help develop that.”

What else would you like people to know about this football season?

“The thing I want people to know about this football season, more than anything, is that these guys deserve to be supported. These guys deserve to have a bunch of people in the stands. They deserve to have a great year. They have worked their tails off all summer. We are out there in the high 90 degrees for two and a half hours and with very little complaining from anyone.” He laughs, “Except  from Joey Greco. Everyone else doesn’t complain. Joey is the only one. But back to being serious, I just want people to know how hard these players have worked. This season we will be successful because of that.”

Have you been enjoying coaching these guys? What’s unique about them that you’ve not seen anywhere else?

“One thing we have said as a staff from day one is ‘this is a fun place to be’. It’s a fun group of guys. They learn so quickly. We correct them one time, and it’s automatically fixed. They then make new mistakes which are good because they learn from those new mistakes. It’s been exciting with these guys. I get up, and I’m excited to come to work because I feel like I have guys that are really working hard and giving it everything they got. As coaches, we demand a lot from them and we have gotten it back. We’ve gotten everything we’ve asked, and that’s the kind of thing as a coach that gets you going. You have guys that are willing to step up, answer the bell, and answer the challenges we give them. That’s what special. That’s a joy and that’s been a major reason why we enjoy being here and we are enjoying it everyday.”