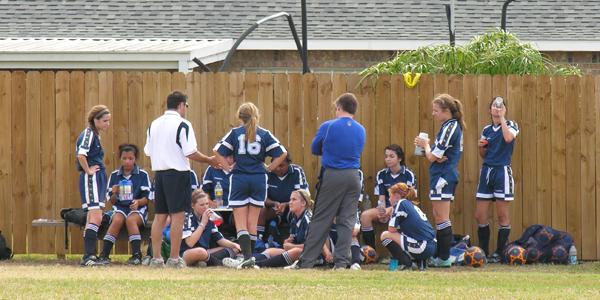 The Ascension girls had their first ever soccer team this school year.

There were 14 players, 11 playing on the field and three alternates.  Stewart Leblanc, a former STM soccer coach, coached the girls.  Al Granger, Nicole Granger’s father, helped Coach Stewart out with the new team.

“We didn’t win a game this season, but I don’t believe that this shows the true team that we were,” said Senior Alex Smith.  “We as a group became closer, and I am proud to have been on the first ever AES soccer team.”

The majority of the fans were parents, but some of the students went to a few games to support the team.

According to Alex, the highlight of the season for the girls was their last game because they played like a true team, with only one alternate.

“In the future I would like to come back and see that group of girls excelling in soccer,” said Alex.