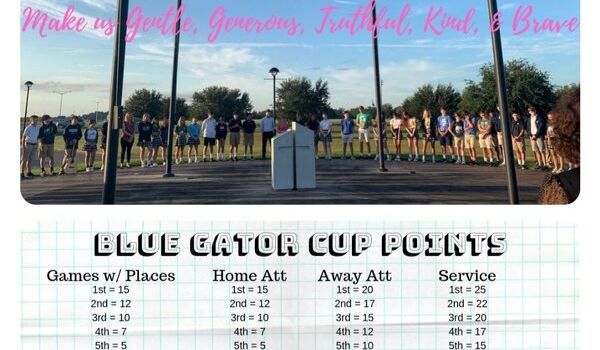 As coveted as an Olympic gold medal, as sought after as winning the super bowl, as prestigious as the Nobel Peace Prize. What is it I am referring to, you might ask? Why, the Gator Cup of course. Similar to the house cup competition seen in J.K. Rowling’s uber popular book series, Harry Potter, the Gator Cup competition is a year-long, merit-based competition.

Instead of being grouped into Gryffindor or Slytherin, the lack of a magical sorting hat calls for the students to instead simply be separated by their grade levels. Each grade must earn points throughout the year that will go towards winning the Gator Cup. Students can earn points for their grade by being a good Samaritan and receiving merits (3 points), winning games (up to 15 points), participating in service projects (up to 25 points), and attending sports events (up to 20 points). On the other hand, points can also be taken away from grade levels if a student in that grade receives a detention, Saturday detention, or suspension (-2, -5, and -10 points respectively). Instead of Dumbledoor yelling “ten points for Gryffindor” when a team receives points like in Harry Potter, the Blue Gators use the “Spirit App” to track points and check into events–Ascension is nothing if not modern. What the grade level receives if declared winners of the Gator Cup is actually unknown but whatever it may be, it highly desired.

Those who have been students at the SMP campus for multiple years are probably familiar with the infamous and unfortunately anticlimactic class competitions that occur throughout the year. These include service project competitions, spirit competitions, and pep rally games. I say anticlimactic because, to be frank, they were. Few people would participate and the spirit contest was typically won by the grade who even slightly raised their voice. With the Gator Cup up for grabs, however, students have newfound motivation to step up their school spirit game. Senior Julianne Echelard says, “Nobody really cared, but now we want to win because we can’t let the eighth graders win.” She also says, “Seniors must be superior” and really, who can argue with that?

When questioning who started this competition, I was directed to none other than Dean of Students, Mr. Sorrell. I asked him what inspired him to start the Gator Cup at Ascension and he said, “About seven years ago, at my old school, I started a similar competition…to foster and boost involvement in all areas of school spirit…I thought it would be a good idea to propose it here so I brought it to the prefects and they ran with it.”

The Gator Cup has undoubtedly fostered friendly competition amongst the grades. It seems to be receiving positive buzz and sophomore Emily Hebert says, “I think it’s a cool idea… my grade is not doing too well, though.” Luckily, there is plenty of time to gain more points so no need to worry, sophomores. I also spoke to Coach Dardar who simply says, “I like it.”

Although many are enthusiastic about this new addition to Ascension school spirit, some students are still skeptical about the whole concept. Senior Emery Doga says that the point system “puts a lot of power in the teachers’ hands to not be biassed.” When asked to elaborate, she says, “for example, when the juniors won the spirit contest in the pep rally, it felt very biassed… I have never had so much school spirit in my life.” Despite not being a fan of this competition, she does prove that the Gator Cup has encouraged a boost in school spirit from students who typically did not buy into such concepts.

Coming to the end of the first quarter, the seniors are the lead, followed by the juniors, eighth graders, freshmen, and sophomores respectively. Since the beginning of the year, the coveted first place spot has been alternating between the juniors and seniors. At the end of the day, the alpha will be on top. Hopefully the school spirit continues to thrive, driven by this healthy competition.