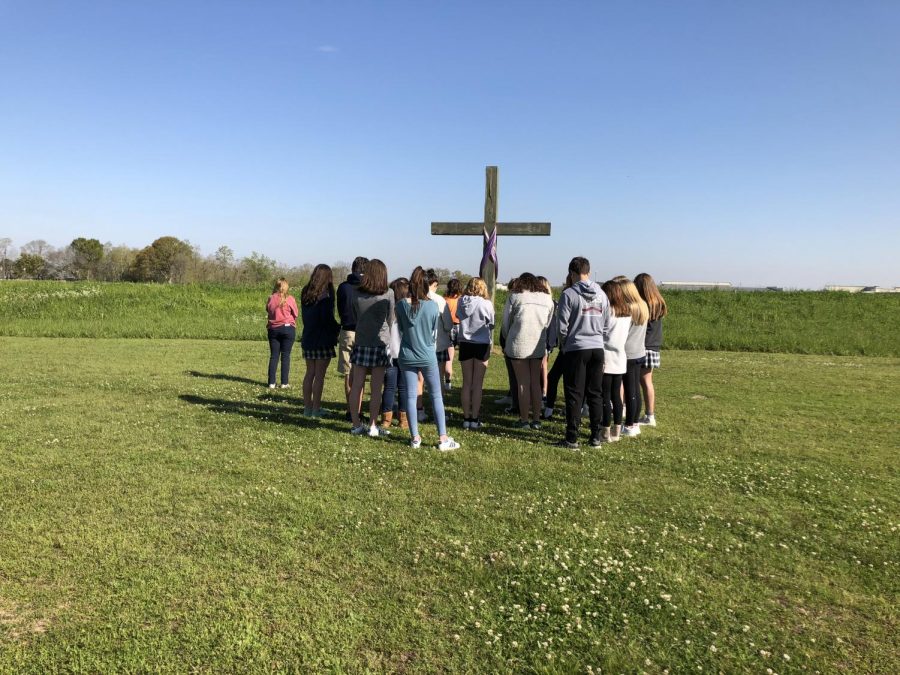 I sit in the back of Mrs. Chassion’s science class, distracted by people walking through the hall and Mrs. Walker’s loud teaching voice. The doors stay open, welcoming visitors from wandering students, tours, or Coach DarDar checking in (and making everyone tense up in the process). On my way to the bathroom, I pass by the glass-framed classroom to see Mrs. Bourque teaching her finance class and make my way to the library where I overhear senior boys laughing at Vine compilations up in the loft. I visit with Mrs. Monica and Mrs. Stephanie at the front “office”. Voices, stories, and people flow from one room to another in our openly designed school building.

My phone vibrates in my pocket, I look down to an alert from the news app on my phone to find a headline detailing yet another school shooting. I do not mean to speak of such an event with a nonchalant tone, but rather, with one that is discouraged and fed up. I walk back to class imagining what those students felt when their standard day of school was upended. I picture a large figure with a face I don’t recognize entering the hallways of my safe place. He is carrying a large gun.

The place where I can leave my wallet, keys, or food lying around and trust that they won’t be touched. The classrooms where I walk around shoeless, with my friends that feel like family, speaking whatever is on their mind. This place, where I spend (what feels like) double the amount of time I spend at home, is exposed to the same violence that way too many schools across the nation have encountered. The students at this school are subject to the same fears as they walk from class to class. This place and its students are vulnerable, they are in jeopardy.

In the middle of February, students attempting to learn in an environment similar to ours ran through the hallways and hid behind filing cabinets fighting for their lives. A man shot and killed seventeen students and teachers at a high school in Parkland, Florida. An analysis from Washington Post has found that more than 150,000 students attending at least 170 primary or secondary schools have experienced a shooting on campus since the Columbine High School massacre in 1999. This figure doesn’t include the dozens of other ways students have been affected by gun violence, such as suicides and after-school assaults. The survivors from Florida, most of which are not even old enough to vote, did not waste any time raising awareness of the root of this problem. They are intentionally advocating for the protection of students with the conviction that no one should feel unsafe in their place of learning and that no one should be killed unnecessarily at the hands of a gun again.

The students are spreading their stories through #NeverAgain and making major moves with politicians. Exactly a month after the shooting, students across the country made moves of their own by walking out of their schools in solitude with the victims and in protest of gun violence. These teenagers are aware, underestimated, and armed with a passion for a change.

In South Louisiana, at our school, this walkout manifested in a unique way. Throughout the last week, I heard rumors that our ever-changing Eucharist schedule was influenced by this national protest. I was told that the protest would be incorporated into the service, that students would be led and forced to protest gun violence, rendering the terms “student-led” and “protest” inapplicable. Thankfully, for whatever reason, this didn’t happen. Instead, we were granted an “open break”. As I made my way outside, I saw a variety of students and teachers reacting in their own ways.

On the chilly, yet sunny morning, at precisely 10am, a group of students headed over to the large wooden cross out in the field. Together, they read through the names and biographies of the young victims. Students of all grades and backgrounds banned together to process what has been taken, what has come to a shrieking halt. That is, the lives, dreams, and careers of teenagers–who, on paper, look shockingly similar to students here–are over. The group read of scholarships unclaimed, sports teams missing members, and choir chairs empty.

This display, however, was not how every member of the Ascension family mourned the loss of both lives and a sense of safety. For all seventeen minutes (one for every victim), people played and danced around in the grass, celebrating the life that they have. I saw students making new relationships and sharing moments of peace together. I overheard conversations working through possibilities of what can be done to stop this pattern and about what really is causing all of this seemingly avoidable destruction. Freshman Annie Mouton noted, “It made me realize how our time is limited on this Earth and that we are very fortunate to go to a school like Ascension, also that we should appreciate all that we are given on this Earth.” It was a period of realization for many, in the best environment possible: a school painfully similar to the one that was taken advantage of.

But, of course, with every argument, there are two sides. The majority of students and teachers that stayed inside during the break. Many aren’t aware of this crisis, and a good bit contend that there isn’t anything to be protested. Some students feel that they aren’t in any place to have opinions on such polarizing issues, and some are protective of their Second Amendment. Senior Blake Dauterive explains that “protesting is stupid and a waste of time. The only way to get anything done is to sit down with people in power, not just walking outside.”

Whichever category you fall into, however you feel about the specifics of gun laws, it is clear that there is a conversation to be had. Before we hold another argument about which models are most commonly used, speak the name of an attacker, or practice another assault drill, let us look at the bigger picture. Let us tap into that feeling of unrest and discomfort in our stomachs to make sure–by whatever means necessary–that we never have to mourn lives so similar to ours ever again.