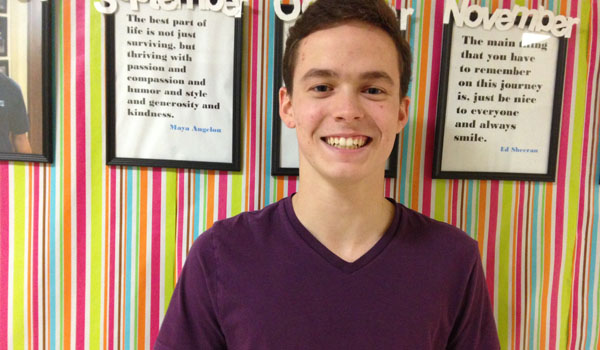 Senior Luke Butcher is the second student in AES history to be named a National Merit semi-finalist.

The National Merit Scholarship Qualifying Test is given through the PSAT to juniors across the country each year in mid-October.  The highest possible score is a 240, and, generally, students who score above 200 are considered as potential semi-finalists, but each year the score range reflects a percentage of test takers.

“Although we have had several past commended scholars, Luke is our school’s second National Merit semi-finalist, and we are very proud of him.” says Mrs, Fournet.

“I became a national merit semi-finalist by achieving a high enough score on the PSAT, or the Preliminary SAT. I took the test in October of my Sophomore and Junior year,” explained Luke. “Junior year was the year that my scores ‘counted’; sophomore year was just for practice.”

Semi-finalists and their schools have to complete a detailed application in order for students to move forward and be declared finalists.  Scholars and some finalists can earn up to $10,000 a year from participation in the program.

“But I think the average scholarship awarded is $5000,” said Luke. “Some schools provide more scholarship money if you indicate upon admission that you are a scholar.”

In February of next year Luke will find out if he will be a finalist.

Luke’s advice to students taking the PSAT this year is “Use all of the information and practice materials in the small booklet that you received at the Sophomore Smarts and Junior Journeys meetings. It prepared me well for the test because I understood the format before the test day and had a feeling for what the questions would be like.”