Juniors Journey to Colleges Throughout the Southeast 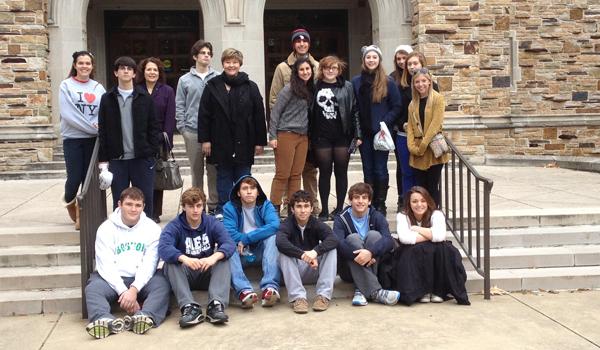 While most of the school was still asleep, the Junior class boarded the bus at 5 a.m. Tuesday, Nov. 13 to take a highly educational school field trip. Traveling all across the Southeastern United States, the juniors visited seven colleges, ranging from small liberal arts colleges to large state universities.

The first leg of the road-trip was to Mississippi, where they visited Millsaps College and University of Mississippi. After eating breakfast and lunch at the universities and attending information sessions at both colleges, they made their way to Memphis, Tennessee, home of the blues. The night was full of fun, as the students were allowed to venture around downtown Memphis. Many students ate at famous Memphis BBQ restaurants, and afterwards, shopping in the eccentric stores was a must.

The next morning, the juniors made their way to Rhodes College, a small liberal arts school in Memphis where they met up with AES alumna Erin Patin. After, they visited Sewanee, The University of the South. They stayed the night in Monteagle, TN, making sure to stop at the ever famous Piggly Wiggly, where theology teacher Mr. Curtis had his first job. Pictures were taken.

The next day, the students took to the road again, this time for Alabama to visit Samford University, Birmingham-Southern College, and University of Alabama, and then finally drove the seven hour journey back to Youngsville.

“I really enjoyed being able to tour a majority of the college campuses and being able to interact with some of the college students,” said Laurel Smith about the trip. “Before the trip, I was convinced that I wanted to be an LSU tiger… Now, I’m looking at small D2 or D3 schools, such as Rhodes or Birmingham Southern.”

Many other students agreed that their eyes were opened at the possibilities that became apparent from the trip.

“I had my mind pretty set on where I was going to college, but my mind changed completely after this trip,” Andre Guidry shared. “The colleges we saw are all unique from each other, so you get a good perspective of the different options of what fits you best. Even regardless of the colleges themselves, it was still a really fun trip!”

Overall, the Junior trip was received very well amongst the students. The educational aspects mixed excellently with the fun freedoms the students were given, making this trip one to remember by the upperclassmen, and one to look forward to for the eighth, ninth, and tenth graders.