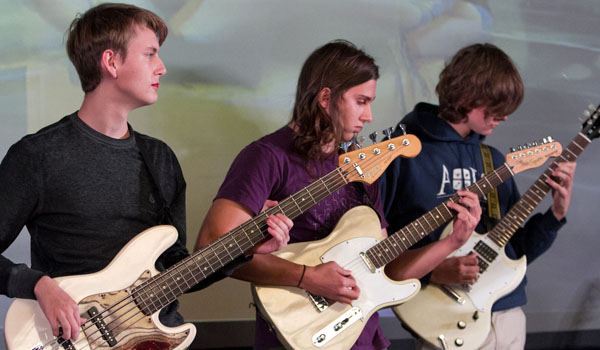 Homecoming week is finally in full swing here at Ascension, and with it comes many fun-filled activities for each day. The first day of homecoming week, twin/opposite day, was also known as “Music Monday” after the second annual homecoming concert put on by the AES music department. The photography and Fine Arts classes also participated in the making of music videos for each performance.

As the students filed in and found their spots in the audience, a “The Office” themed video played, portraying students’ responses to the answer “What does homecoming mean to you?”, followed by the opening song, The Office’s theme song.

Continuing, Michael Trahan sang Muse’s “Feeling Good”, followed by Samantha Sawvel’s rendition of Missy Higgins “Set Me on Fire”. Next, “Float On” by Modest Mouse was sung by Jake Parra, with Shelbie Andrus’s stunning animation in the background. Carly Hampton, Michael Trahan, and Nolan and Ian Callecod then played “Watch Yourself” by Eric Clapton, with stunning improvised solos by each of the musicians. Following, Thomas Ashy played an impressive glockenspiel in Gotye’s “Somebody That I Used to Know”.

After that, we all saw Nolan Callecod’s “soft side” as he played the guitar for Jeff Buckley’s “Hallelujah”, accompanied by Samantha Sawvel, Carson Sanders, Cate Stevens, and Emily Cormier in vocals.

All while this was taking place, Carrie Grizzaffi and Michael Case were on the sidelines, painting separate halves of one painting, a diptych of a Phoenix. Before the last song began, the two halves were joined together as one. Finally, the music department also joined together in their last song, “Don’t Stop Believing”, a classic song by Journey.

“I thought that the mix of music was really good, and the musicians were really talented!” said Senior Laura Lee.

“As a part of the musical group, our hard work and preparation for the show really shined in the performance,” Carly Hampton said. “I thought each musician stood out in performing their specific part.”

Overall, the music department really showed their hard work and dedication during this concert, and as we look forward to the rest of this homecoming week, we can also look forward to more development from our own AES musicians.