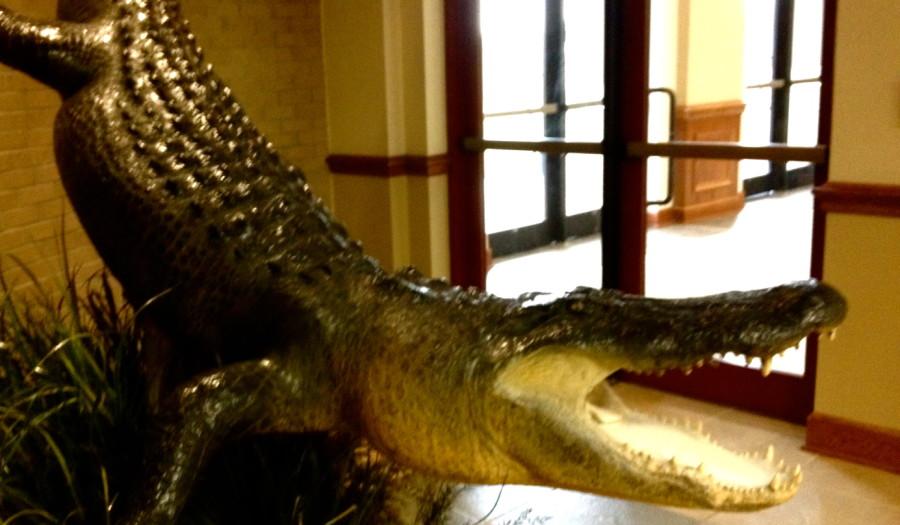 It’s hard to miss the 13-foot alligator that’s taken up residence in the foyer. This new addition symbolizes our mascot and Ascension as a whole.

Dr. Pitre gave The Authored Ascension the inside story on where it came from and how it made its way to AES.

Mr. Mark Fontenot, who is the father of a lower school student at AES, donated the gator.

“That monster was not caught in a remote swamp; he found it in his backyard!” said Dr. Pitre.

Mr. Fontenot lives on the Vermillion River, and this enormous alligator crawled up into his backyard. He immediately called the wildlife center, and when they arrived and saw the size of the alligator, they knew that they had no other choice than to kill it.

This alligator was so big and impressive that Mr. Fontenot knew he wanted to do something with it. He decided to get it mounted and donate it to Ascension as a blue gator spirit gift.

The gator was unveiled at the beginning of Homecoming week and is displayed near the foyer, the main entrance of the high school buidling. This spot was chosen mainly because it needed a big enough space to fit its size and mount. The foyer is also a high visibility area where the gator can be seen by students and visitors.

The gator is not yet named, but Dr. Pitre has announced a naming competition where the winner and two friends will receive a pizza party.