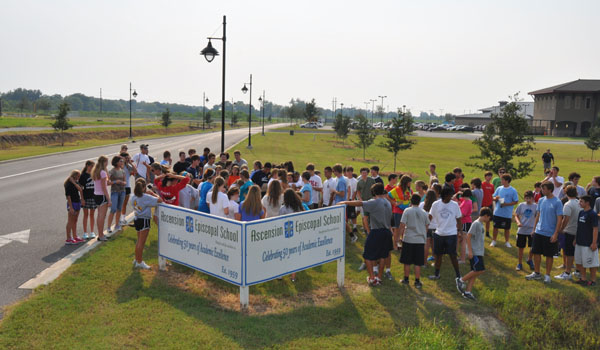 On Friday, August 26, 2011, each junior and senior student received a new member of the family.  The school kicked-off the Big Brother/Big Sister program, which connected eighth grade students with their upper school buddies.

“As the upper school, we want to welcome them into the Sugar Mill Pond community” said Mrs. Renard, dean of student life.

With an after-school scavenger hunt that spanned the campus and Sugar Mill Pond neighborhood, new friendships and bonds were made that will last a lifetime.

The students were arranged into groups of approximately eight students, but they did not find out the identity of their brother/sister until the end of the hunt.

During the course of the scavenger hunt, students had to solve clues and receive totems at each stop.  For one goal, brothers and sisters had to find Mrs. Lad’s house, grab her dog Gumbo, and take a picture.

According to Mrs. Renard, brothers and sisters will keep in touch throughout the school year.

“We will do some activies with the advisory,” she said.

Coming into high school may be nerve racking for some students.

“Big Brother/ Big Sister was initiated so that each eighth grade student would have a mentor or someone that they can ask questions and get help from,” said Mrs. Renard

Before the scavenger hunt, eighth grader Ethan Chaisson, was asked what Ethan wanted to get out of this activity, Ethan responded, “ Respect, Love, and Friendship.”

After the scavenger hunt, Junior Laura Lee was asked what was most memorable about the Big Brother/ Big Sister Friday afternoon.”I thought it was [memorable] when we were running around SMP, and we saw Alex and Greg in his car and took a picture,” said Laura.