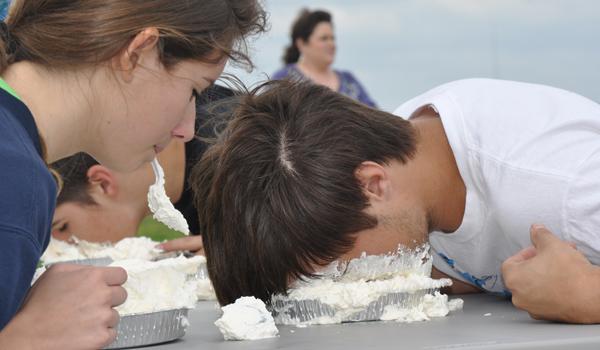 What better way to kick of the Mardi Gras holidays than with Field Day?

After two hours of classes, AES students gathered in the gym for chapel, a talent show, and lots of games.

The talent show featured the comedy stylings of Senior Kevin Boland, a rapped tribute to Mr. Johnson by Juniors Alex Voorhies and Heath Headley, a piano recital from Senior Helen Kerns, an a cappella rendition of Billy Joel’s “Piano Man” by brothers Jake and Parker Parra, and Michael Trahan’s cover of “I’ll Follow You into the Dark” by Death Cab For Cutie.

Michael won the talent show and performed an encore of “Hey Ya” by OutKast.

“I think Michael deserved to win,” said Senior Rachelle Mosing.  “He played really well, and I think he made the sophomore girls swoon.”

Following the talent show, students and teachers enjoyed games in the gym, including jousting and a sumo wrestling competition.  Even Mrs. Renard and Coach Braun suited up in puffy sumo suits to spar with each other.

After a lunch of jambalaya, burgers, and hot dogs, students were treated to an assortment of parent presentations.  Some of the exhibits included a horticulture lesson from Billeaud Horticulture, a ceramics demo from Wortman Pottery, a rock wall from The Boy Scouts of America, and a health and nutrition session with Karen Grizzaffi.

The day finished with water gun wars and class competitions, including an obstacle course, an egg toss, and a fill-the-truck competition.  The object of the last game was to fit as many students as possible in the bed of a truck.  The seniors, with the help of many eighth graders, won.

“My favorite activity was the water guns,” said Senior William Barry.  “I had the biggest gun.”