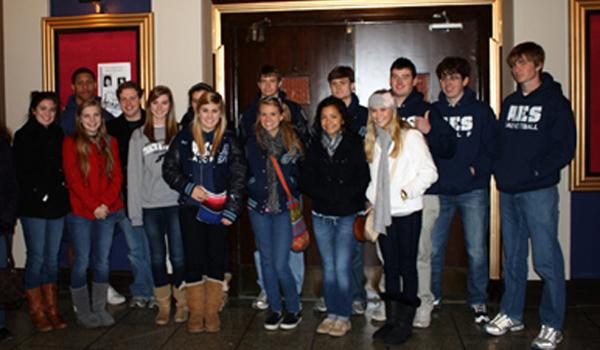 Several AES English classes got a taste of “something wicked” on Thursday.

Students were up early and ready to travel to New Orleans to see Macbeth, a Shakespeare play, at Tulane University.  The English I class, AP English class, and both English IV classes were in attendance.

Macbeth is a tragedy about a Scottish thane whose ambition ultimately leads to his downfall.  It was a traditional Shakespeare play with minimal props, only one stage setting, and a very small cast of actors.  The cast was a mixture of students from several local universities, professional Equity actors, and local repertory actors.

“No movie, class discussion, or written assignment can ever recreate the excitement of the audience and the actors or the unique understanding of Shakespeare’s words gained through a live performance,” said Mrs. Lobello.

According to Ms. Fournet, even a traditional staging of Shakespeare lends itself to new interpretation.

“I liked how they used the trapdoor as the cauldron during the ‘bubble, bubble, toil and trouble’ scene,” said Ms. Fournet.  “Since Shakespeare intended that part of the stage to represent hell, it was a perfect spot for the dark deeds of the Weird Sisters.”

Once the play ended, the students and teachers headed off to the Esplanade Mall for a quick bite to eat before going home.

“My favorite part of the field trip was getting my double doozie cookie at the mall from the Great American Cookie Company,” said Senior Rachelle Mosing.