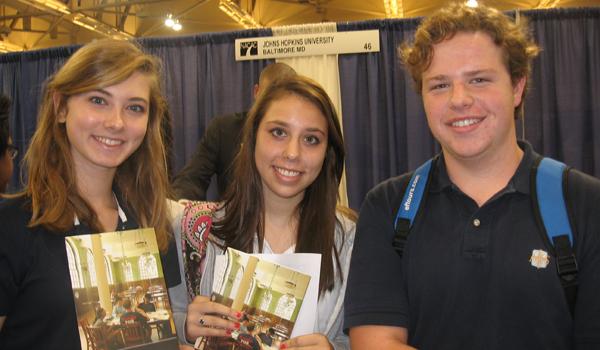 Juniors and seniors got to sample a host of schools on Thursday at the NACAC College Fair at the River Center in Baton Rouge, Louisiana.

More than 4,000 students attended, and over 80 colleges were represented.  Many Louisiana colleges were there, along with many other schools from all over the country.

“I learned most about Loyola, Tulane, and Rhodes,” said Junior Alex Chiasson, who is thinking about studying journalism or public relations.  “I liked Rhodes because it was really small; it seemed different, and it was in a place that I’ve never been before.  I liked the other colleges because they are in Louisiana and they are close to home.”

“I have no idea what I want to major in,” said Parker.  I want to stay within Louisiana for college because I need the money for TOPS, but my Dad won’t let me go to UL.  I want to stay close though because I still want to come back to Ascension to help with the sports programs after I graduate.”

Junior Cody Chalmers and Senior Erin Strenge also checked out many schools, including the University of Alabama, Baylor University, and Belmont University.   Cody wants to go into engineering, and Erin is interested in studying in physical therapy.

“Baylor has the number one engineering program in Texas and 12th in the nation,” said Cody.

The majority of the students who went on this educational field trip had a great time and felt more prepared for college when returning home.

The trip was not all business.  Students were able to enjoy lunch around the Shaw Center, and there was time to relax by the fountain.