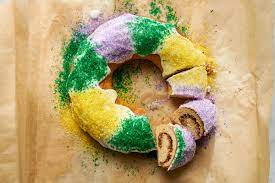 There are many fun traditions that originated from the Mardi Gras holiday, one of them being king cake. This tradition came from the act of giving gifts to children to commemorate the Christmas season in the Middle Ages, one of which included a special dessert – king cake. The king cake was given as an honor for the Three Kings who brought gifts to baby Jesus. They are meant to symbolize the unity of faiths, decorated in purple, green, and gold to represent different attributes. The purple represents justice, green represents faith, and gold represents power.

The Food Club at Ascension decided to incorporate the spirit of Mardi Gras into their monthly meeting this past Wednesday by testing out many different kinds of king cakes. They sampled different cakes from Rouses, Meches, Gambino’s, and Nunu’s. After the tastings, they came to a consensus that Rouses and Meches were tied for the best king cake.