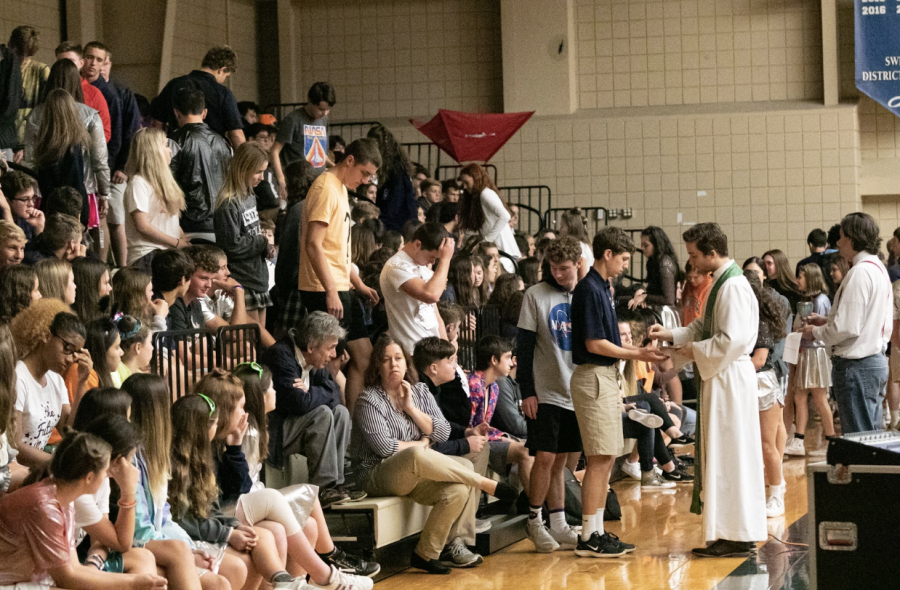 Eucharist is a celebration of Jesus Christ’s crucifixion. It is found in several institutions of Christianity throughout the area. Some churches participate in this service every Sunday, while some do it only on holidays. Here at Ascension, we celebrate Eucharist too. No one is outright against the Eucharist, to the extent of our knowledge. However, since we have to participate in it once every two or so weeks, we feel we have some grounds to speak on the pros and cons and how it can be better tailored for high school students.

A pro of having the Eucharist so frequently is that we are able to enrich our school with the Episcopalian values that are held close to our school. It also keeps the church in touch with the school and visa versa. We asked Reverend Kennedy his opinion and this was his response: “My thoughts on the Eucharist can be summed in a few quotes from C.S. Lewis:

‘There is no good trying to be more spiritual than God. God never meant man to be a purely spiritual creature.  That is why He uses material things like bread and wine to put the new life into us. We may think this is rather crude and unspiritual. God does not: He invented eating. He likes matter. He invented it.’ (Mere Christianity)

‘Particularly, I hope I need not be tormented by the question “What is this?” — this wafer, this sip of wine. That has a dreadful effect on me. It invites me to take “this” out of its holy context and regard it as an object among objects, indeed as part of nature. It is like taking a red coal out of the fire to examine it: it becomes a dead coal… The command after all, was Take, eat: not Take, understand.’ (Letters to Malcolm)

‘Yet I find no difficulty in believing that the veil between the worlds, nowhere else (for me) so opaque to the intellect, is nowhere else so thin and permeable to divine operation. Here a hand from the hidden country touches not only my soul but my body. Here the prig, the don, the modern in me have no privilege over the savage or the child.’ (Letters to Malcolm).”

These references confirm Reverend Kennedy’s faith in the Celebration of the Eucharist. He believes that we are being invited to a table to feast with God, and we should all accept the invitation. He believes that this is a good activity that should be implemented in a student’s life.

Unfortunately, most students do not enjoy Eucharist, and they have valid concerns. Senior Emmie Gage says, “Eucharist is long and boring. I wish that the homilies were more interesting and relatable.” Junior Andre Domengeaux says, “It should be more student oriented. With how it is right now, it is kind of dead time.” The student body believes that if more students were involved, it would encourage more students to engage and pay attention at Eucharist.

Spiritual Life Prefect Emma Guidry says, “In my opinion, Eucharist has already been improved by moving it to the bleachers from the chairs on the ground. Somehow that makes it go by faster by whatever laws of space and time. I appreciate everything Eucharist stands for and represents, but sometimes I find myself dreading going because of the length of the service and the overall lack of interest in it from the student body. We in the spiritual life committee are working to make Eucharist more engaging.” The common thread between all of these students is the lack of participation from students.

The student body believes that Eucharist would be better if the people speaking in the homilies were more engaged and appealed to the students more. Eucharist is an amazing ceremony that solidifies the bond we have with Christ. However, we are teenagers who need stimulation constantly, and if certain changes were implemented we would find ourselves as students dreading Eucharist significantly less.