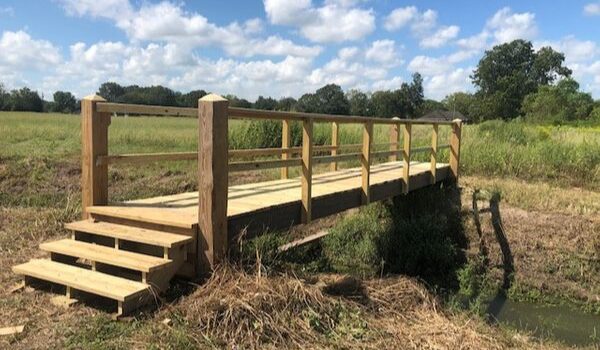 Braydon Crouchet is a member of the Cajun Prairie Club, and as a service project for his Eagle Scout group, he built a bridge. It took him, some of his fellow troops, and the scoutmaster about five days to build the bridge. However, taking time to plan the mission took them about a year. Braydon built the bridge in hopes of maintaining Eric’s name within the Cajun Prairie. Brayden says that he looks up to Eric and that Eric has been his role model throughout his years at Ascension.

Being an Eagle Scout requires dedication and bravery, which Brayden displays through his completion of the bridge. I asked Brayden what kind of characteristics do you need to be a Eagle Scout and he said, “… one must be able to show leadership and kindness, and I desire to be known as a man who displays genuine qualities.” The bridge has added a unique touch to Ascension that not many other schools display.Brayden’s display of courage and diligent work has contributed to the beauty of Ascension and made it a place worth attending.