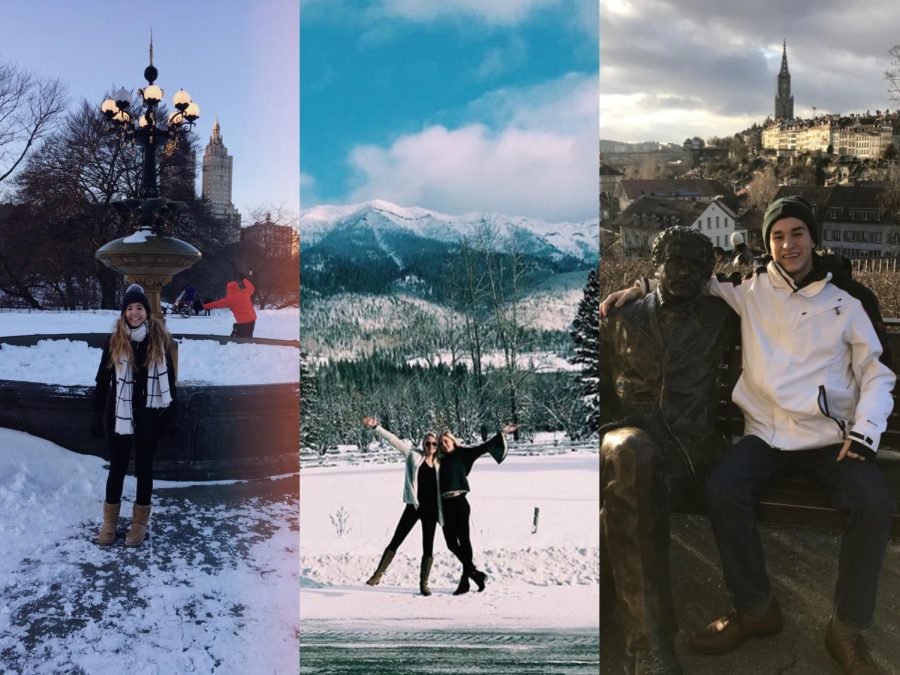 Our wonderful winter break may have come to end, but that does not mean we cannot relive it through the shoes of those who certainly had a break to remember and for us to be jealous of. While those who stayed home got to embrace some surprisingly warm Christmas weather, others got to experience some below freezing far, far away from home. Want to hear about the lights in NYC, snow globe scenery in the exclusive mountain of British Columbia, and the delightful food in Switzerland and Austria? Well then stay tuned because Grace Roy, Jillian Barzyck, and Justin Anderson are gonna tell you all about them.

Did you dream of a white Christmas? Well here’s one for ya! Grace Roy had a blizzard in NYC for Christmas, but even a snow storm could not stop her from her fun. She was able to see the Phantom of the Opera on Broadway. She also said that New York was a great city to visit because of the many popular attractions, such as the beautiful Christmas decorations all over the city, bright lights in Time Square, Empire State Building, Statue of Liberty, 9/11 memorial, numerous museums and shows, and a ridiculously impressive amount of places to shop. Lastly, Grace thinks that New York is a great place to visit if you are a big city type of person that can deal with the crowds.

Maybe the big crowds and super touristy attractions aren’t quite for you. If so, Jillian Barzyck’s trip to Fernie, British Columbia may be more appealing to you. This city is beautiful in the winter time due to the soft white snow and beautiful mountains covering the landscape of the town. Jillian said that her favorite part was being able to ski in the mountains on Christmas with remotely no lines on the slopes. Even though the weather was -12 degrees at the top of the mountain, it was still a blast. She also discussed a holiday celebrated in British Columbia called Boxing Day. This holiday is similar to the American tradition of Black Friday, but in British Columbia it is a national holiday. Lastly, Jillian says that Fernie is a wonderful city to visit due to its beauty and exclusiveness.

Lastly, and most interestingly, Justin Anderson visited Austria and Switzerland, specifically Vienna, Bern, and Zurich, over the break. He said that they are both filled with fascinating culture and very unique and tasty foods. They had wonderful Italian food, due to the Italy being a neighboring country. Justin said that the most memorable part of the trip was when he went to a restaurant that was cash only. His dad did not have the money, so he was held hostage with people who only spoke German while his dad went to a bank to get money for their meal. He also said that it as very cool to visit Bern, Switzerland (the home of Albert Einstein) because he was able to see where he lived and the town that inspired him in his work and studies. Lastly, Justin said that Switzerland and Austria were by far some of the most beautiful places that he had ever visited, and probably will ever visit.