Take Me Out to the (Base)Ball Game 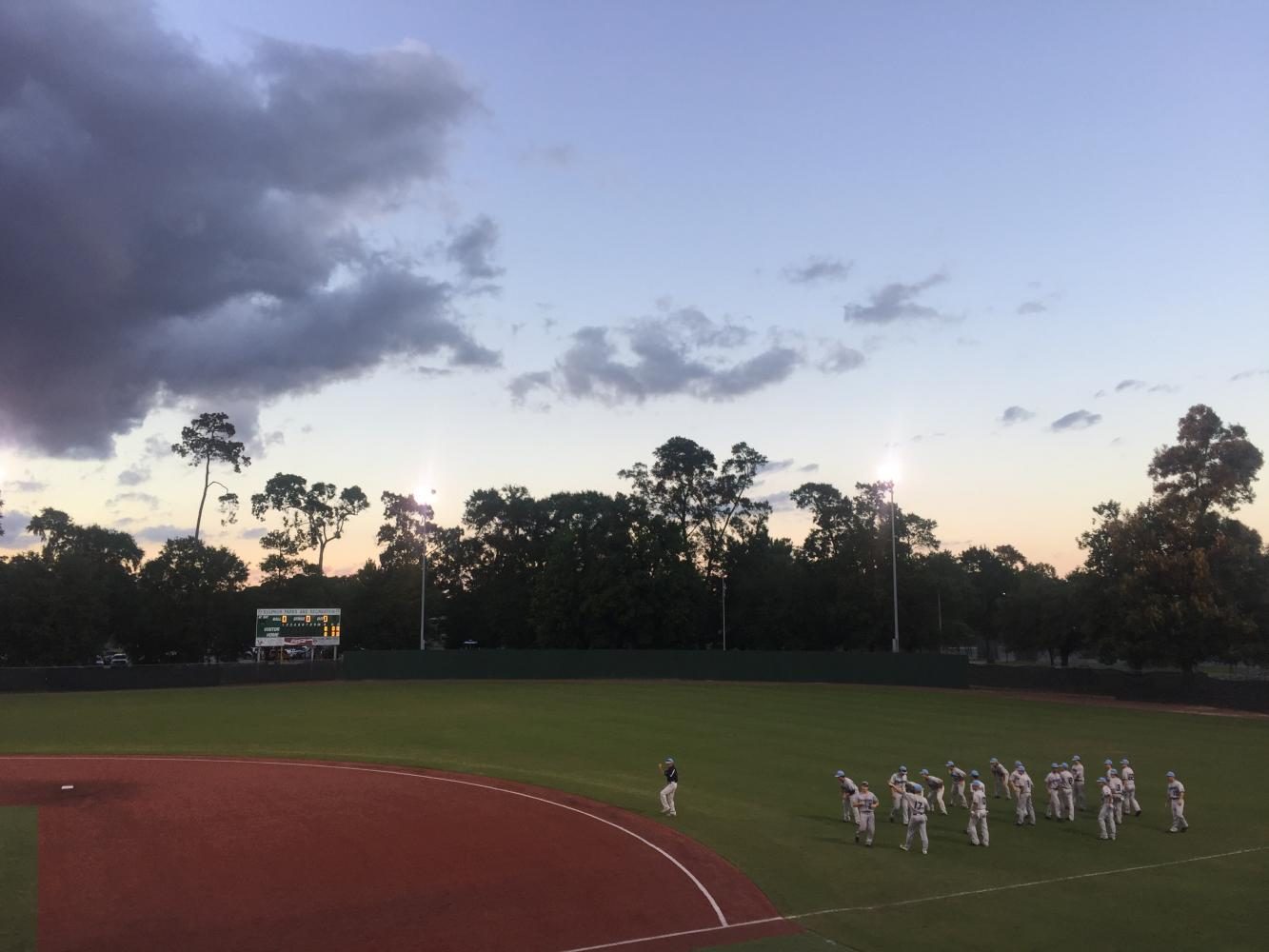 As the weather starts to heat up, the sunshine, baseballs, and bats come out, the fans go out to support the baseball team! Leading the team this year is a group of skilled coaches: Head Coach Lonny Landry, Coach Scott Mccullough, Coach Tim Comeaux, and Coach Jay Domengeaux. Veteran seniors Brennan Lightfoot, Will Fox, Josh Hebert, and UL Commit Jeffrey Elkins are guiding the team on their final season. Thus far, the team has played 12 games, with an impressive 8-4 record, though none of these have been district matches. The boys will play two more games, including a tournament this weekend, in preparation for the district face-offs. It has been noted repeatedly that the team is increasing in chemistry and confidence. Similarly divided as most sports at Ascension, the baseball team has both a JV and a Varsity, both performing remarkably well this season. While JV team plays less often and is overall younger, they do not lack determination or drive. The light-hearted Junior Varsity holds a 4-1 record currently. Both baseball teams are known to be well tempered, dedicated and overall successful.

Baseball seems to be a fan favorite at Ascension, as the weather almost always perfect and the baseball team’s hard work is easy to enjoy. Avid baseball follower Caroline Zaunbrecher, a junior at Ascension Episcopal School, has her own suggestions to revamping the fundamentals of the sport adding that “the team should play two innings instead of seven.” If you have had the opportunity to last through one of the sometimes lengthy games, you are well aware that the team and coaches take pride in keeping the field well kept. After each game, Coach Lonny takes a few moments to humble the team with a review and then requires all the players to take care of the generously donated baseball field. The baseball team is considering taking up landscaping with their new skills on the off season in hopes of making some extra money. Our prestigious grounds are home to many jamboree-style tournaments in which many teams from all over the state travel to play each other. These tournaments provide opportunity for growth, challenges, and exposure for every team.

Most of the team members can credit their chemistry to working one another assisted by the passionate coaching staff for many years. The team is prepared to work with respect and connection toward their long time goal of becoming District Champions. Starting pitcher and third-baseman, Sean-Michael Brady (sophomore) elaborates, “Our team goals, like many other team’s, in the state is to win district and state championship. I am confident that we have the team to accomplish those goals this year.” This has been the biggest goal for the baseball team since the program began not all that long ago, and hopefully the team can reach it this year. When asked about the team so far, seasoned coach and teacher of American History, Coach McCullough, spoke with excitement about this year’s prospects saying, “[The team is] starting to play real well. Pitching is coming around. We are finally starting to hit the ball.” To see for yourself, head out past the tennis courts out to the baseball fields most nights of any given week!