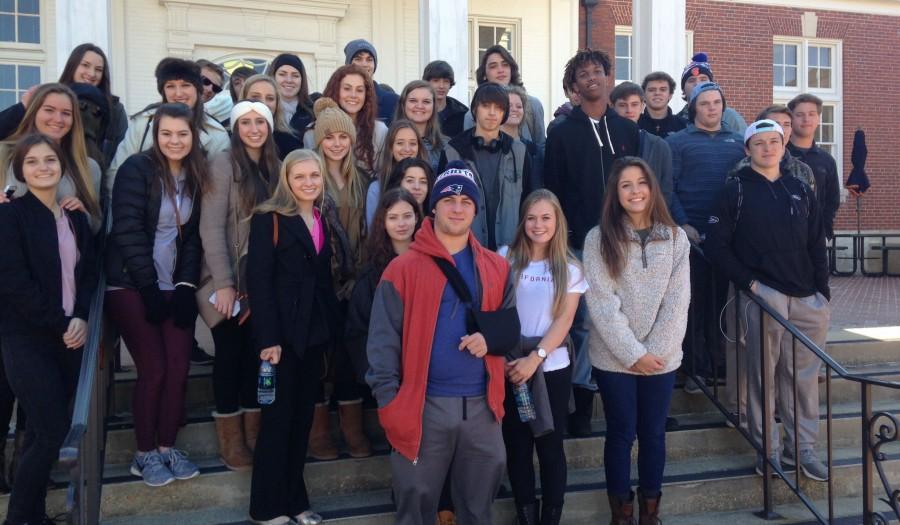 Every year, the junior class goes on a college tour all over the South to visit different colleges. This year, we went to Spring Hill, Auburn University, University of Mississippi, Mississippi State, Rhodes College, Millsaps College, Loyola University and Tulane University. Before we actually got to the first college, we endured some interesting problems. About forty minutes into the trip, we had to switch busses because we didn’t have Wifi and the air conditioner was broken. Then, Elizabeth Lee realized she had forgotten her wallet which ended in a little trip to the Tiger Stop to meet her mom.  The last problem we had was a locked bathroom and a bus driver who didn’t believe it was locked.  The bus driver was convinced it was not locked so we watched as five or six students tried to open it. When she was finally convinced it was in fact locked, Ronald Leblanc stuck his long arms through the trash can into the bathroom to unlock it manually. Of course, Mrs. Lad tweeted about it.

The colleges were all very nice and many students changed their mind about the kind of university they wanted to go to. I think the overall favorite of the class was Ole Miss. The prettiest campus in my opinion was Mississippi State. We went to small colleges and large colleges. We went to private and public colleges. We saw the cities they were in and ate large amounts of breakfast at each university. Personally, I learned about myself and the type of college that would be best for me. I know many students learned about themselves as well.

Emily Maron said,  “At first I was convinced I wanted to go to a huge school with a Division I soccer team. After we went to Millsaps, it really made me think that maybe I want to go to a smaller school.”

As this class always does, we managed to get into a little trouble. Ronald even came close to getting a charge for “breaking and entering”. Fortunately, it was just a storage closet and the door was open! The lady at the front desk obviously didn’t like us at all. The next night, the manager didn’t like us much either. He patrolled the halls looking for sneaky teens after we got a few noise complaints, but no one got suspended so it all ended okay.

Overall, it was a great trip. We had fun, learned about college, and got a huge reality check. Most importantly we all made it home safely with a new bond that will last forever!