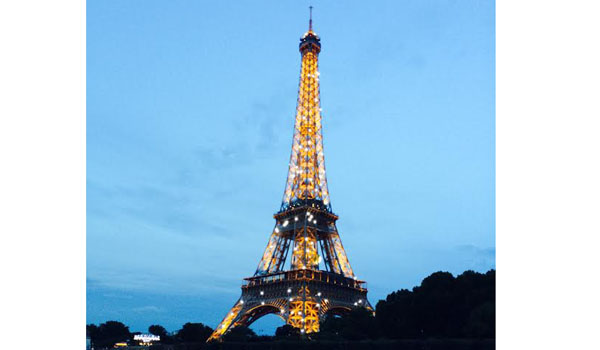 This summer, Ascensions students, teachers, and parents dusted off their passports and travelled to Germany, Switzerland, and Paris.

The trip would start in Munich Germany where we would spend several days exploring the different culture. The first day we arrived was rough; everyone had not been able to get much sleep on the plane, but we still had a full day of touring ahead of us.

We arrived at the Munich airport around nine o’clock in the morning their time. Our amazing tour guide Ingo was waiting for us after going through customs. The bus ride into the city of Munich was about 45 minutes; during this time Ingo gave us a quick history lesson on Germany.

One of the things that stood out to most everyone on the trip was how the Germans spoke. Trying to understand German was very difficult and confusing. The famous writer Mark Twain said “It takes 30 days to learn English, 30 weeks to learn French, 30 years to learn German.” This quote captured how the group was feeling about listening to the German people talk.

Something I noticed that really stood out was the type of cars on the street. Most of the people were driving smaller German made cars such as BMW, Volkswagen, and the Mini Cooper. Some of them were even riding mopeds and motorcycles to get around the large city.

The group did not stay in the city limits, but just outside the city. The hotel where we stayed was family run and a unique place for out time in Germany. It was only about a 10-minute bus ride back into the city from the hotel. The hotel was not like any other I had seen. It was designed more like a large house with many different rooms than a hotel.

The bus ride was about seven hours from Germany to the small town in Switzerland where we would stay for the next few days. The driving restrictions are taken very serious in Europe and must be followed. Our bus driver would need to stop ever two hours and rest for 15 minutes and could not drive for more than 12 on any given day. Even though the drive was seven hours, it took us 12 because of the restriction the bus driver had to follow.

When the group arrived in the town it was only a mile long with about 20 building in all. The town was overlooking a beautiful lake that looked as if you would only see it in movies. The small town was surrounded by mountains with only one smaller, winding road to get to it.

On the first full day we spent in Switzerland, the group traveled 20 minutes to the much larger and wonderful city of Luzern. The city’s architecture dates back to the 1700s and roads are paved with cobblestone. Even though the city was old, the shops and restaurants were not.

One of the biggest differences was the price of anything. Switzerland is the only place in the world to use the Frank which made everything more expensive. For example, at McDonald’s a Big Mac was eight Franks which converts to about 11 US dollars.

The drive from Switzerland to Paris was only four hours. We arrived in Paris just in time for dinner and a visit to the second tallest building in Paris, the Montparnasse.

It took the group about three hours to get to in and out of the building. While were waiting in the very long line to get to the elevator, one of the staff members said this was the most people ever to be in the building at once.

The races of all the people in building varied greatly. Our group were some of the only people from America. There were many Asians and Polish tour groups. We ended up waiting about two hours to ride the elevator 686 feet down to ground level.

That night our hotel overbooked our rooms, so unfortunately the group had to be spilt up in three different hotels. It was 1:30 when everyone got into their rooms.

The next day we visited the Eiffel Tower for the first time. The tower had a large tennis ball hanging in the middle to honor the French open tennis tournament going on that weekend. Later the same day the group visited Notre Dame, the beautiful church in the middle of Paris.

During our visit a service was going on, and we were able to watch the opening prays. Our next stop was the Lourve. We were lucky to sneak a look at the Mona Lisa. We took our tour bus to the Arc De Triomphe, which was partially under construction. The group was still allowed to visit the amazing view form the top of the Arc.

Our third day in Paris we visited the beautiful Opera House. The group was scheduled to get a tour of the house from a expert who worked in the house. Later the same day the group walked across the street to the Parc De Lafayette. The four buildings that make up the Parc were very large and filled with all kinds of shops.

We woke early the next morning and took a bus about 45 minutes away to Versaille. This was one of the most beautiful and amazing places in the world. Upon entering the building, everyone in the group had their breath taken away. It was really fit for a king. The paintings and furniture were incredible.  The property of Versaille stretched for miles in every direction. It also included a small lake and large garden.

Our last day in Paris was spent around the bottom of the Eiffel Tower. The group took pictures and enjoyed the view. Later that night the group hopped on a boat and took a ride around Paris. As we passed the Eiffel Tower, it started to glow with lights all around and fireworks shoot into the sky.  The view from our tour boat was incredible. When the group exited the boat everyone was taking pictures under glowing Eiffel Tower because it was our last night together.

The trip was amazing, and I’d go back next week!