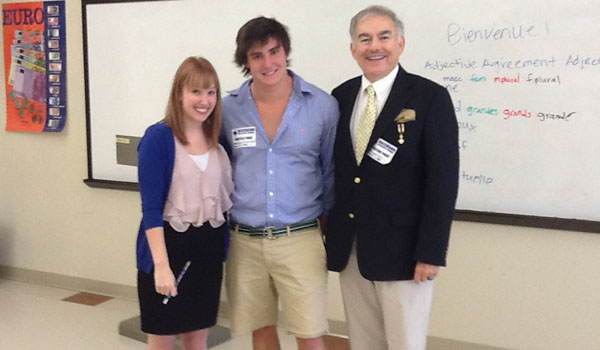 AES certainly got a taste of our French culture when the grandson of French princess Orleans, Anne-Francois Houzel, visited Lafayette on Monday, Aug.27.

If France was still governed by a monarchy, the 20-year-old would be today’s prince of France. Anne-Francois was in Lafayette to unveil a statue of Jean D’Arc at the new shopping center, Le Marquis. Along with the unveiling, he also came to learn more about both the English language and his Cajun connections. Upon arrival, he was greeted by the Ambassador to France, Henry “Lynn” Breaux. While he was visiting, they agreed to meet with some of the French classes at AES.

He brought along pictures of his home, an enormous castle with a beautiful church on its grounds, and his ring, a 140-year-old relic passed down from generation to generation. Then the class was allowed to ask questions.

Emily Daly then asked if he had found anything about his ancestry in Louisiana.

“It’s very nice to see what my family has started here,” he replied. “In New Orleans, I’m very much reminded of my ancestors.” He continued speaking to the class, informing them about the differences in the American and French education systems, including entry into universities.

“I find it strange that someone who does not do well in high school can continue into university because of their abilities in sports. It’s very unusual to me,” said Anne-Francois.

Anne-Francois is now attending business school. He is excited about future innovations and even told us about his plan for a new generation of iPads. He’s also extremely interested in learning different languages, and he’s taking several Chinese language classes.

“It’s been very fun. I’ve enjoyed learning about this heritage ” explained Anne-Francois about his journey to Louisiana. “I’ve been to many cities during my trip. I was in Baton Rouge, northern Louisiana, New Orleans, and now into Lafayette. It was exciting and I’ll be eager to visit again soon.”