Was This Year’s Homecoming, “The Greatest Homecoming on Earth”? 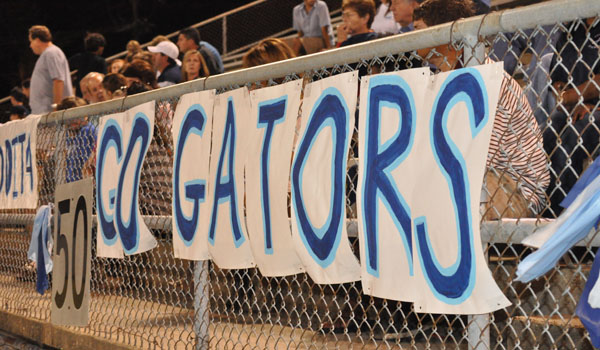 Banners lining the halls during homecoming week read, “The Greatest Homecoming on Earth”.  With a slogan like that, the pep-rally, the game, and the homecoming dance held a lot of pressure to be the best thus far.

However, this homecoming definitely lived up to the hype and expectations of the students.

The pep-rally on Friday kicked off the fun filled weekend. Dr. Cox spoke at the pep-rally and surprised the crowd by saying he “ain’t scared of no bears” and was “eating bears for breakfast”.  He then proceeded to roll around on the ground, wrestling with a stuffed animal bear.

With teachers busting moves with the dance team, plowing each other down in sumo suits, and jumping through hoops for the amusements of students, it is no wonder that the student body did not notice that the pep rally ran overtime.

The homecoming game, that night, was an exciting, nail-biting game that ended with a victory along with a comical ending. The Ascension Blue Gators defeated the Gueydan Bears, winning 43-36.

With about five minutes left of the game, the sprinkler system went off unexpectedly, spraying the team and the homecoming court. The crowd immediately burst out into laughter as the girls on the homecoming court ran away, and the football players were a little thrown off.

Nevertheless, I think the game was the most spirited and exciting game that Ascension has seen in a while.  The stands have never been so full.

Saturday was the much anticipated Homecoming Dance.  Many students have said that it was the best homecoming dance yet.  With more than 140 students on the dance floor, it was certainly our biggest!

As a senior this year, this year’s homecoming was the perfect ending to four years of the AES homecoming experience.