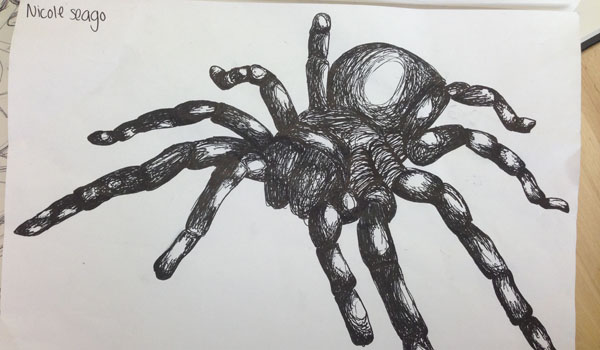 Hello, my name is Maria Fernanda and I met Sofia when we were both very little.

It was a breezy summer day, her birthday in fact, and she was very happy to have a new playmate. I was in my favorite red dress, I only had one dress back then, and she was wearing green. She wore green a lot, I think it looked good on her. As soon as we met she wanted to go play and then we became best friends.

We stayed very close for a very long time, and I got new dresses! We had a lot of fun playing together; she would brush my hair, and pin it out of my face with a white gardenia clip she gave me.

But then she met Isabella. Isabella also wore a dark green dress and Sofia could braid Isabella’s long black hair just like hers, but mine was too short to play with like that.

One morning, I wanted to put on my yellow dress, but it wasn’t there. I looked and looked but couldn’t find it. So I put on my old red dress and went outside to tell Sofia, and that’s when I saw it.

Sofia was sitting on the front steps – braiding Isabella’s hair, and Isabella was sitting in between her knees – wearing my dress! And I decided something had to be done.

So I rushed back inside and found some of Isabella’s things sitting on the table in the front room. I was blind with rage and threw everything off of it. I broke what I could and hid what I couldn’t. She had a little brown toy purse that I couldn’t damage just yet, the fabric was too durable for me to tear, so I hid it in the folds of my skirt and vowed to deal with it later.

I could hear them laughing outside.

Sofia was mad about Isabella’s things; she blamed it on her brothers, the dog, everyone except me. I think she had forgotten to accuse me. And while she was interrogating the family, Isabella was sitting pretty on the couch. Yellow doesn’t look good on her.

The next day, Sofia was paying special attention to Isabella. I think she was trying to make up for her stuff getting ruined. It started with just a tea party; the two of them sat down at her little table and Sofia put Ana, her doll in a little pink frock, in the third empty spot. When they were finished Sofia and Isabella sat on the porch again like yesterday. She gave extra care to braiding her hair today, sweeping up the sides around her head and braiding until they met in the back and hung down with the rest. Sofia pinned the braided parts up with the white gardenia clip I left in the kitchen.

And that was the straw that broke the camel’s back. That did it; I was done. Higher measures were going to be taken to get my Sofia back.

I stayed in my room the rest of the day, waiting for them to go to bed. Outside my window I could hear them playing in the yard, laughing and shrieking. That night when they went to bed and Isabella got all tucked in in her pretty white nightgown I crept into the room.

The moonlight came in through a crack and danced across her porcelain skin. I took some scissors off of the nightstand and cut one end of strap on her brown toy purse.

If she wanted to play it that way, fine. Isabella was such a doll wasn’t she, and you just wanted to spend eternity with her, didn’t you? Well that can be arranged.

Sofia was alone now, her toys were put in the closet, and I got up.

It wasn’t long before her parents found everything, they never could figure out what happened – even with the help of the police.

No one could fathom how a little girl could be found hanging from a rafter in her room, and next to her a little doll dressed exactly like her – the green dress, the braided hair, down to the straps of the matching brown purses holding each of them up.

When they were buried they put Sofia’s doll in the casket with her, and even bothered putting both their names in the epitaph. “Here lies Sofia Sanchez and her beloved doll Isabella, may they rest in peace”

Eventually, Sofia’s things were boxed up and even later they were handed down and given away and sold until one day, many years later, a box labeled “Old Toys” was opened. Within the layers of dresses and mismatched shoes there was a piece of paper with a list of the items in the box, as well as the dolls and which items they had on them.