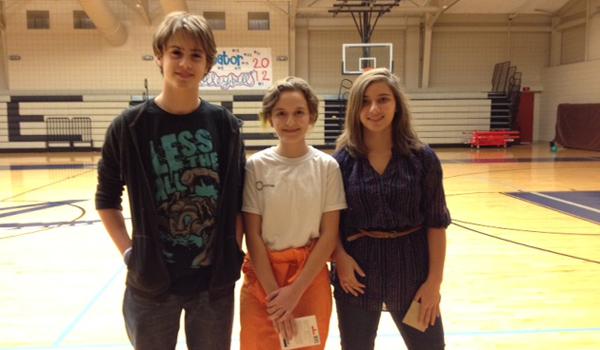 It was in the cool season of Fall in ’98 on October 17th when our nightmare began. Mike and Nick were both with me when it all started. It was just another typical Friday night, we were hangin’ out at my house with a few girls, Claire, Nicole, and Jenny. Claire had fallen asleep on my shoulder while watching Jaws 3, although everyone else was still wide awake.

“Hey Nathan, think you can get us some more popcorn,” Mike said as he handed me the bowl and the empty popcorn bag.

“Sure.” I gently picked Claire up off of my shoulder, careful not to wake her, and headed into the kitchen.

I threw the empty bag away, put the bowl on the counter, grabbed a new bag from the pantry and put in in the microwave. I set the timer for two minutes and thirty seconds then listened as the kernels started to pop. I could hear screams emanating from the TV in the background.

When the bag of popcorn had finally slowed, I removed it from the microwave, grabbing it by the tips careful not to burn my fingers. I brought the popcorn back into the den to share with the rest of the group where Claire had already woken up, arms outstretched for the popcorn. I handed her the bag and after she fixed herself a bowl she put the bag on the couch and continued watching the movie.

After about half the movie had passed I got a creepy feeling there was someone staring at us. I looked out the window and behind the couch but then thought I was being paranoid. I continued watching the movie but could not shake that feeling.

As we watched, the light cast shadows across the room making everyone tense.

Then the doorbell rang, Nick looked at his watch and said, “Who could that be. I thought your parents weren’t supposed to be here ’till Monday?”

“They’re not.” I got up and opened the door where a neatly placed note was sitting on the door mat.

I opened the letter and read, “Kill everyone and save yourself or perish along with your friends.” It was written in a hand far too advanced to be a child’s. I ran back inside, slammed the door shut, now breathing heavily, and threw the note in the trash.

When I was back with my friends, I told them what the note had said. They all seemed very shocked… except for Nicole. She got up, announced that she thought all of this was B.S., and went outside. “Nicole, get back in here,” yelled Jenny.

Everything went silent then a bone chilling scream filled the night.

“Nicole!” everyone screamed simultaneously. Again, everything went silent, but only for a moment.

“Where is she,” Claire asked, “She better not be messing with us ‘cuz I swear I’m gonna kill her!”

“Too late,” Mike said pointing across the room at the window next to the TV. A bloody red hand outstretched in the corner of the window. “Oh my God!” screamed Jenny, who was, a few seconds ago, sitting on Nick’s lap. As quickly as it had appeared, it vanished. Then I thought I saw the faint image of the pumpkin missing from the porch disappear a little after the hand.

Mike stood up, legs shaking, and said, “I’m goin’ out there to save Nicole.”

“No you’ll get killed!” I yelled at him as if he were stupid. “Well who else is gonna go out there to try and help her… ya, no one, that’s what I thought,” he said in response. As he moved his way toward the door, Jenny said a small prayer.

“Do you really think that God is gonna help us, we’re being attacked by a freakin’ serial killer,” Mike yelled at her. He opened the door and walked out into the darkness of the night. Two minutes passed and Mike was still not back yet.

“You ok Mike?” yelled Claire out the door and in the direction Mike had gone. “Ya I’m right here,” Mike called back. He walked back through the door half a second later, hand gripped around the arm of Nicole laughing historically.

“You guys are all big wusses, you all freaked out when you saw my FAKE bloody hand! Haha, I got you all!”

“God Nicole, you really suck, we were all freaked out, we thought you had been murdered or something!” screamed Jenny.

“Well I’m just trying to have some fun,” Nicole replied.

After about half an hour, everyone had cooled down from Nicole’s prank and set our minds on the note. We talked about it for a while and again Nicole had something to say.

“Are we all still on this topic, let’s just finish watching the movie ‘cuz I don’t now about anyone else but I have to be home by 1.” We all started to watch the movie when Mike asked where the bathroom was.

Ten minutes had passed and Mike still wasn’t back.

“What the hell could be doing in there,” asked Claire. Nick and I went to go check things out, we knocked on the door but no answer. “You ok in there babe?” asked Nicole. Still no answer. I slowly opened the door only to find Mike’s body lying on the ground with a knife through his head.

“AAAAHHHHHHHHH!!!!!!!!!” screamed Nicole which attracted the other girls.

I looked above Mike’s dead body and written in his blood was, “I warned you”.

The girls ran from the room quickly followed by us guys. Everyone was freaking out, screaming and yelling, some crying, but mostly scared for their lives. “Calm down,” I screamed over the noise, “we have to find out who did this to Mike before they come for someone else.”

“I’m calling the police,” said Jenny. She went to phone, dialed 911, and waited a few seconds before putting the phone back down. “What? What’s wrong?” asked Nick.

“The line’s dead,” she said slowly.

That made everybody even more paranoid than they already where. I told everyone to close all the curtains and lock all doors. Jenny, Nick, and Claire took the bottom floor while Nicole and I went upstairs. Once upstairs Nicole and I decided to split up to get more covered.

I finished closing three curtains and made sure two doors where locked when I heard Claire scream. I ran downstairs as quickly as I could, scared of what I might find. I followed the scream to my dad’s office where Jenny was lying on the ground, gasping for air with a spear through her chest. Claire and Nick were by her side holding her hand while she tried so desperately to stay alive. Blood was gushing out of her wound when she took her last breath and died in Nick’s arms.

Nick stood up, covered in Jenny’s blood, and yelled, “I’m getting out of here.”

As he opened the door Nicole said, “What about the killer, what if he gets you. You’re not safe,” her voice dropped to a whisper, “no one is.”

“Well its better than sitting here, cooped up waiting to be killed, and for help that may never come!” screamed Nick.

Nicole stared to cry and ran off down the hallway and up the stairs.

“I’m sorry Nicole, I didn’t mean to say it like that,” Nick called as he followed in her direction.

“Well, what are we going to do now. We can’t leave, the killer might be in the house, and everyone is starting to die off one by one because we are not doing anything,” asked Claire.

“I don’t know but we have to stick together,” I replied, “Come on, let’s go find where Nicole ran off too.”

Claire and I walked up the stairs and had looked in three rooms so far before finding her curled up in a ball on the floor of the guest bedroom.

“Nick didn’t mean to say what he said like that. Come on, we need to form a group, we can’t split up anymore,” said Claire trying to offer some words of encouragement. “We need to go find Nick,” I said.

“I think I saw him walk past here like a minute ago but I didn’t want him to see me so I hid,” replied Nicole, “I think he went into your bedroom, Nathan.”

We followed Nicole because she seemed to know where she was going.

She walked us right to my bedroom whe she stopped dead in her tracks.

“I was so sure he came in here but I don’t see him.” I walked over to the closet, wasn’t there, checked under the bed, not there either. “Where are they,” asked Claire. I went over to the balcony and found where Nick had been hiding. The girls followed and gasped simultaneously and ran back inside. Nick was on the ground in front of the house, pushed out of the two story balcony. It was gruesome, glass was everywhere, shards inhis face and torso. his spine was cracked and was partially out of his body outstretched, moaning for help.

I almost threw up at the sight of him like that. I turned around and saw Claire actually throwing up all over my bed. I look around a see a figure standing behind Nicole, reach around and grab her mouth.

“NICOLE!!!!!!!!!!” I screamed, getting the attention off Claire. I flung my body in the direction of the stranger but not before Nicole was quickly whisked away.

I ran out of my room and into the hallway but the killer had vanished. It was like he wasn’t even there. I hurried back into my room to get back to Claire where Nicole was hanging from the ceiling by a noose around her neck.

“But that’s impossible, I just saw Nicole dragged out of this room. What the hell is going on!?!” I yelled.

I ran back down the stairs and checked every room for Claire. I turned and saw a knife pierce me right between the eyes. My vision started to fade.

Then I wake to sound of a doorbell. “Oh my God. I just had the weirdest dream.”

“Ya nobody really cares but…uhm… Are you gonna get that?” asked Mike. “Sure.”

I got up, opened the door and found a note at the doorstep.