Movie in a Minute: The Words 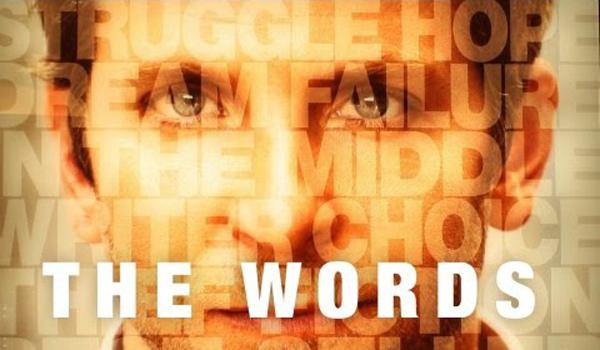 Recently, I had the opportunity to go see the movie The Words in theaters starring Bradley Cooper, Star Trek’s Zoe Saldana, and Jeremy Irons alongside other stars such as Dennis Quaid, Ben Barnes, and Olivia Wilde.

The movie focuses on the meager life of Rory Jansen (Bradley Cooper), a stereotypical new writer struggling to pay his bills as the rejection letters continue to pile up on his desk. As his father’s insistence to abandon his dreams and become a man begins to take a toll on Jansen, his wife, Dora (Saldana) decides to take him around town in to lift his spirits for the day, and it is here that he discovers a very weathered leather bag.

Time passes before he actually finds a tattered out manuscript in the lining of the bag, and with only the desire to feel successful, he retypes all of the words exactly as they appear on the paper and leaves it at that. When his wife finds the typed manuscript on his computer, she insists that Rory take it to his boss to be published, revealing that it’s the best thing he’s ever written and he could never deny the world those words.

As the books popularity grows out of control, Rory encounters the original author of the book which would hardly be considered an act of fate, but a horrible tragedy on the old man’s part as he recounts the best and worst parts of his life that was the basis of the story. After giving Jansen a bit of a backstory on the book he wrote, the old man leaves Jansen sitting there with a decision to make: does he tell everyone what he did or keep it to himself? To find out what Rory’s choice is, you’ll have to see it in theaters!

While I think the movie was wonderfully thought-provoking after a summer focused on movies like The Avengers, The Dark Knight Rises, and Abraham Lincoln: Vampire Hunter, it also seemed a bit unorganized. The movie constantly jumped from narrator to narrator, and there was an entirely separate story with Dennis Quaid and Olivia Wilde which left my wondering, “Why is Dennis Quaid here?”. While I love both actors, I was confused as to the relevance of their storyline on the side as Rory struggles with the old man’s forgiveness as well as his own. Overall, the movie was interesting to watch and I’d recommend it to anyone who is interested in war struggles and writing.