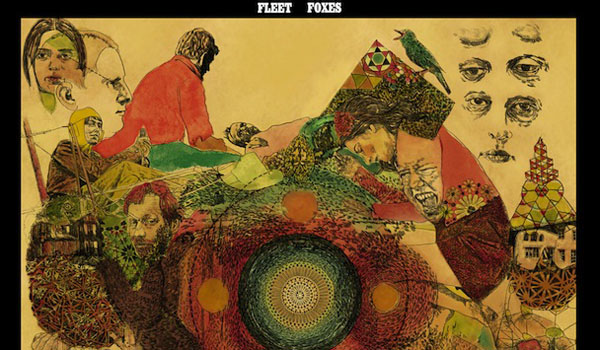 The band began with only Pecknold and Skjelset playing together until they moved to Seattle and gained the rest of the members. Fleet Foxes didn’t gain popularity until 2007 when they signed to Sub Pop Records, and in 2008 they released Sun Giant – EP. Their first full-length debut was Fleet Foxes (2008), showing off their unique style of harmonic voices and ambitions nature.

Fleet Foxes became known for just that: vocal harmonies, complex instrumentation, songs about nature and history, an indie, folk, baroque-pop sound, and a name evocative of peculiar English activities (fox hunting). They released Helplessness Blues in May of 2011, and with it the band really shows how much they’ve grown since Fleet Foxes, especially in the instrumentation. The album is full of bursts of mandolin, horns, tambourine, and drums. Regardless of what it’s labeled as (indie, baroque, what have you), Fleet Foxes has a consistent, acoustic, romantic sound that makes this album truly magnificent.

This isn’t an album that can be listened to in pieces. It’s one that really had to be heard from beginning to end. Helplessness Blues opens with the song “Montezuma,” a track that sets the mood for the rest of the album. With swells of shimmering strings, a steady beat, and romantic lyrics it’s one of the best songs on this LP. That sparkling ambitiousness is kept up throughout the album, even on the softer tracks like “The Plains/Bitter Dancer,” “Cascades,” “Someone You’d Admire,” and “Blue Spotted Tail.” Even on “The Shrine / An Argument,” Fleet Foxes manages impeccable arrangement in a relatively simple-sounding song. The LP closes with the song “Grown Ocean,” one of my favorite tracks. It starts with a lot of energy and ends quite abruptly with the lines, a cappella, “Wide-eyed walker, don’t betray me / I will wake one day, don’t delay me / Wide-eyed leaver, always going,” a quick ending but somehow satisfying and final. The whole album, from start to finish, flows perfectly together.

This album is, without a doubt, one of the best albums that has been or will be released in 2011. If you like bands such as Band of Horses, Andrew Bird, Simon and Garfunkel, and Freelance Whales, invest some time in this album. It will be well worth it.