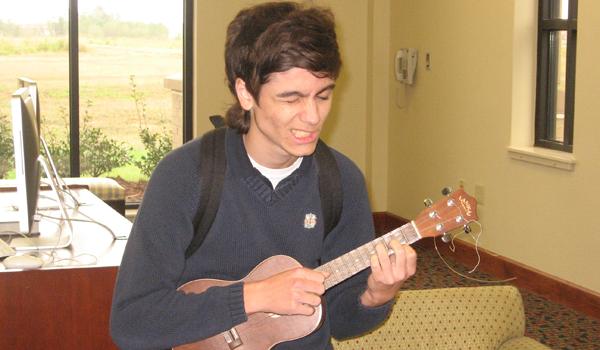 Future rock star and AES Junior Alex Voorhies released his first album on iTunes August 1, 2010.  He and former student Kaleb Lee worked together in order to produce his album, Act I, featuring 11 tracks.

“Me and Kaleb worked together as a team. He manages; I put out music.  You can buy the whole album on iTunes for $10,” said Alex.

The duo call themselves SicFlo Beatz, and the album features many pop songs such as “Ms. Lovely”, “Hot & Spicy, and “Lookin’ Fresh.”

Many Ascension students have reviewed Act I on iTunes.

“How awesome that you got your music up on iTunes! Sounds amazing!” wrote Summer Milam.

Asked how his album sales were going, Alex responded enthusiastically.

The release party for Act I will be December 18th in Carencro.  His second album, Act II, will be released on June 15, 2011.

Other than recording, Alex actually plays at live venues such as The Underground Sea in New Iberia, The High Ground in New Orleans, and the 501 Soundstage in Shreveport.  He occasionally plays with other bands, but he usually just performs alone.

“I’ve been making music since I was about 13 years old,” said Alex.  “This was me messing around with the computer recording pretty much.  It just started with me learning how to use the programs and then moved into me actually recording my own music and performing.”

Along with singing and playing guitar, Alex also plays the flute, violin, piano, bass, drums and is learning how to play the ukulele.  He said that he can play basically any string instrument.

When Alex was asked what kind of music he listens to, he said, “Anything from Big Band to Lil’ Wayne.”

Students can find out more about Alex’s music on his website at www.sicflobeatz.com.